A mask by any other name would still be just as sweet. 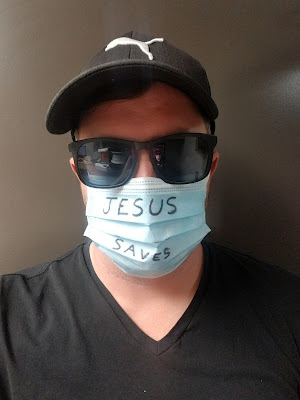 Or maybe the word is sentimental.

Not in the darling way that an heirloom or talisman might suggest but in that it displays a sentiment even as it protects or doesn't.

Masks do prevent unbridled moist speaking from leaving the mouth of an individual. They may not be best at it but they do prevent some. And masks on everyone would prevent more moist speaking from becoming unbridled than masks on no one. They also can protect, given the right construction from things so small you would think they were harmless but big enough to harm plenty in their wake.

There are honest and honorable questions as to the effectiveness of masks in either direction. As a person who has had to take hazardous material training along with respirator fit testing, I've seen the gamut on what mask can and can't do, and frankly, a discussion on these will have disagreeing experts on every side taken and every direction ventured.

So let's look at what masks actually do and leave the debatable's up for debate.

Seeing a mask conveys fear, plain and simple. Personal protective equipment implies a risk and danger, people generally are afraid of danger and should be.

But they also simultaneously convey concern. A blue surgical mask lets me know that the person wearing it wants to take measures as to prevent their moist speaking from accidentally contacting me. Even if their mask won't do that 100% of the time, the concern is noted and I would be foolish to mistake it for anything else.

Yet if this issue were as simply binary it would not be as problematic as it is. There is a third dimension to this cube to be drawn out in lockstep with the other two axis.

Mask's convey a virtue signal like any other mandatory piece of wardrobe. They may not be universally mandated by the government that declared this crisis and lockdowns accordingly, but they are becoming the kind of socially mandated item that few would want to argue against. And speaking of wardrobes, you do wear them remember. And you would be hard-pressed to tell me the kaleidoscope of colorful homemade masks didn't in some way portray fashion. Or that the stylish sleek black models weren't purchased and worn with a hint of vanity in their weave.

Beauty and death are only ever found in lockstep in one individual I've read about. He is cunning and slippery like the hand sanitizer we douse our selves with to make ourselves clean.

So to illuminate this troubling virtue of mask-wearing I propose a simple addition to the equation that should sus out the real meaning behind them. If executed properly it will also make sure that no slippery serpent-like motives make it past the greeters at your church door when you reopen as well.

If you're a Christian, print the name of your church on the bottom edge of your masks in a contrasting color and the name Jesus on the top.

Will you wear that same signal of virtue when it's ascribed to a savior of the highest order of virtue and his institution of virtuous salvation. Did the thought of marking the sterile object make you wince? Or the idea of wearing such vandalized medical devices to your Costco?

People have always been hesitant when it came to evangelizing for a savior from their sins because it inherently admits, that at least at one point, we were infected with that sin and were in fact dirty sinners like the rest of the world.

All it took to take away that infectious stigma was to remove Jesus from the equation and let everyone know in clashing, sterile, hospital-blue masks, that we were dirty, even infected, but Jesus wasn't involved anymore.

So here's my recommendation to thwart all concern and argument to the matter at hand. Every Christian that can, should have their faces covered for the glory of God in Christ, especially when outdoors. With the gospel being declared by their actions and the words, sharpie'd boldly on their face coverings.

While attributed to Saint Francis of Assisi, this quote has as much internet credibility as most of the info you'll find on masks these days. Its truth is still surpassing.

"Preach the Gospel at all times. When necessary, use words."

COVID-19, 2020
at June 30, 2020
Email ThisBlogThis!Share to TwitterShare to FacebookShare to Pinterest