Online as it is in heaven, Sample Chapter "Search Engines" 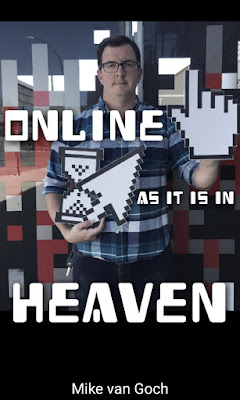 If you gain nothing else from this book, really let the next sentence sink in. You don’t see things on the internet, you search for them.
Whether it’s by active searches or passive preferences, you search for things on the internet. You can see a single tree on a search for a forest in real life but on the internet, every page is an interesting mix of things you want to see and things like what you want to see. These things make up the full view of the electronic forest seen when any single tree is searched for.
This is why on my personal Facebook account the algorithms keep asking me to check out this Mike van Goch guy and his writing. Apparently, the programs that track what I read and watch online thinks I’d like me.
This puts a massive onus on the person behind the mouse and keyboard to what they see and find online. As that access to the web become more and more ubiquitous with higher and higher mobile internet speeds, knowing this fact will be important to the Christian.
The first way this affects the believer is that if they sin online, it’s almost always going to be a sin of commission. As a guy who grew up with an internet where porn pop up ads were a thing, I know how dangerously surprising these situations can be. Yet I know that every time I (unexpectedly) found myself looking at digital nakedness, it was because I went where I shouldn’t have and looked at sites and content that would lead to worse.
Reddit is a great example of this.
On Reddit users can customize their feed of the daily flow or articles, pictures and videos. Their front feed is a conglomerate of what they have selected as what they want to see. Then there is the option for seeing only the newest content hitting the site. This option is available no matter what you’ve set as your subreddit’s, it allows you to go see a subreddit chose that's new from all possible subreddit’s.
Including NSFW ones, even solely pornographic ones. It takes about a day for the site's moderators to catch these and flag them as NSFW or to ban the posts outright if they're truly wrong.
That option perfectly expresses the search/find nature of every internet interaction. Our tech will never be able to remove the nature of our agency online. If we see questionable content, it’s because we chose to look in that general direction. There however are no accidental temptations online, the poster of the nude selfie and the viewer of that selfie both enter into a contract with reality on the same level.
What this means in practice is that content of any sort is predicated on the search terms that it can be found by. This isn’t just the reality for SEO experts, it’s a reality for doing any sort of ministry online. As a fan of exegetical preaching, this hurts. Because I would love to see sermons on YouTube categorized by their Bible verse usage. It would make me looking things up really easy. But on one of the most connected social media platforms to date, geeks finding sermons based on Bible verses is its least desirable use. In the parable about the Servants and the Talents, we read about Jesus view of opportunity and risk in a very compelling way. One maybe not often applied to the realities of the internet?

What if the internet is the risk of using a hidey hole in lieu of a hedge fund in this parable? It can too easily be glossed over, that the world has never been more connected than it is right now. And that “now” is a moving target heading up. Posting information online has to be in the context that if it can be shared it should be shared and more importantly if it can be found it should be found. Nothing makes my skin crawl more online than not being able to Google search my own content, because if I can’t find it neither can anyone else. Alternatively, I hate, like hangnails and pepper spray hate, click bait.
Saying something is one thing when it’s another is lying plain and simple. But the trouble with the internet is that we often get 5-15 words that will show up in a title to decide whether or not we will click. As much as we may want people to find things on the web, we cannot fall into the click bait trap and use deception to get people to hear the first 5 minutes of a sermon they weren’t looking for.
Hear me out.
No one will be tricked into heaven, and flirting with clickbait is a lie waiting to happen.
What about the things you don’t search for and the ever-present rule 34?
Before we go any further,

There are things that are going to show up that you did not search for. Because the algorithms that give you your search results look for best matches to keywords to the Nth degree. And here we see what I assume is the clearest evidence that Satan works on the web.

So how do we deal with this roaring lion?

I think we need to take a big and deep look at the internet as a place, not just a thing. It really is both and that changes how we can approach this problem. And as both a place and a thing we need to know that sinners are going to be present and will most likely post sinful things.
This shouldn’t convince us being in the internet’s barrage of content is not worth it. Posting gospel-centred or theologically sound content is never a bad idea. But try to think of sin on the internet like a lion on a 100-acre farm. If you and the lion are on opposite sides of the farm, there are 100 acres between you and danger. For the most part on the web, you might not be in danger. But you will be in the vicinity of danger and that’s something you want to be prepared for. A Christian shouldn’t timidly or flippantly go online knowing that the lion prowls. Just like a farmer wouldn’t harvest any crop on that farm without being prepared to shoot a lion.
To be prepared for dealing with a lion of Rule 34 type sin online, we need the right kind of weapon to scare it off or cause it as much trouble as we face with it.
A nice buckshot mix of block and unsubscribe tend to do the trick. I also like the calibre of report functions too. These three options need to be present in the civilized society that is the internet. Without them, anyone could post anything which means you couldn’t have anything resembling a market demographic. In order to host kid-friendly content online, a website needs to have systems in place to keep un-kid- friendly content off their site. Similarly, you’ll never see sermons hosted very long on Youporn.com
We need to be courageous enough to block a twitter follower, whose content is blatantly sinful, even if they followed us first. We need to block the offensive people on our pages who are only there to help the lion claim another victim. The idea of a totally democratic internet where anyone can go everywhere leaves a lot of room for people to do horrible things to another. And because so much of our viewing online is based on subscriptions and followers we need to make the conscious choice not to follow things that can go south quickly and not to follow or allow following from the people who strive to make Sin present. Even if it’s in ignorance.
William J. Toms puts it nicely. “Be careful how you live. You may be the only Bible some person ever reads.” (6)
And I think that captures it nicely. A Christian can just as much preach the gospel in disassociation with troublesome forums and subscriptions as an act of devotion to Christ who died for those sins. As they can braving those dark corners of the internet in the hope of converting posters of any and all kinds of sin and opposition to Christ.

A final side note.

We’ll get into it more in another book but something to consider when thinking of search engines is when AI will start considering the gospel. Professor Scott Galloway stated in his Amazon Professional Sellers' Summit Keynote in 2017,

This is strange new territory for man and the simple non-aggressive act of searching for things is slowly becoming the modern man-made god. Pagans used to pray to unseen gods represented by wooden idols and stone statues, now they look for accrued information and a summary of results based on that information. Right now Google sorts through billions of bytes of information to bring you your search results in a matter of seconds. What will happen when the machines that do that become advanced enough to think for themselves?
Eventually, we’ll have AI computers like the ones we grew up watching on Star Trek. Ones that can think and reason and question the meaning of life with cat’s named Spot. That will be an interesting day when they are tasked with finding search results for a blooming atheist’s question of, “Did Jesus really resurrect from the grave?” And Google answers like a Christian instead of like a search engine. In the information sought after by humanity in lieu of a god to pray to, points to God because it is, in fact, a truth claim, what then? If the gospel is the truth, then you would think the subject of that good news would be a top ranking search result.
Maybe we shouldn’t be asking if Google will ever disprove God but rather what happens when God (all powerful, all knowing, all seeing, God) converts Google as his tool for building his kingdom online.
Right now Google searches through keywords. Which allows people to post articles and videos that aren’t about Jesus saving but rather against it. When the Google machine begins considering the entirety of everything posted to the internet we might just have machines stating as fact what we have only had as belief.
This is why being an authentic Christian online is important. We have a very real chance to prove in .00000003 seconds per search that Jesus is Lord. By contributing to the internet’s very fabric. By making our content and theology searchable, so when people ask Google about a topic, our faith shows in the search results.